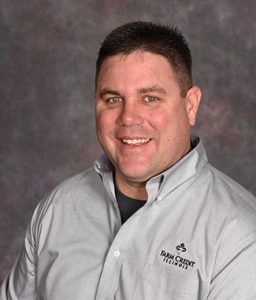 Cory Mitchell of Farm Credit Illinois was re-elected President of the Champaign County Farm Bureau Foundation. Mitchell is the first former Foundation scholarship recipient to lead the foundation board of directors.

After adding four new members in January, the CCFB Foundation Board of Directors has elected its 2020 leadership team. The 15-member board of directors added four new members. Joining the board is Brian Arends of AHW John Deere; Matt Hoose, Chief Agribusiness Officer of Prospect Bank; Kory Kraus, General Manager of Illini FS; and Brian Krukewitt of Krukewitt Farms.

Re-elected by the board to serve as its President was Cory Mitchell a 1990 recipient of the CCFB Foundation scholarship and Vice President of Ag Lending at Farm Credit Illinois. Mitchell remains the first former scholar to lead the organization. Mitchell tells us that he’s excited to continue leading the Foundation and to give back to the organization who believed in him as a college student.

Joining Mitchell on the executive team is Vice-President Jessica Patzwith of Illinois FBFM and Secretary Cheryl Hartke who is self employed as a consultant, speaker, trainer and educator. Re-elected to the post of Treasurer is Jason Bartell of Bartell Powell LLP.

The Foundation Board of Directors and staff pride themselves on communicating the critical importance of agriculture to our community. The Champaign County Farm Bureau Foundation was created in 1985 and educates by bringing knowledge and understanding of agriculture through the Ag in the Classroom program, by providing scholarships to Ag leaders, and by fundraising to sustain those initiatives.